Last visited: Page 5 of Falling for the Bully (Falling in Love 3)

Page 5 of Falling for the Bully (Falling in Love 3)

When she looked up at him but avoided his eyes, he knew she remembered.

“You didn’t drink enough to forget about the night before, interesting.”

“I really don’t want to talk about this.”

He moved out of the way so she could use the bathroom. Leaning against the wall, he kept an ear out just in case she lost her footing, or was injured in some way, or whatever else could affect her. He hummed to himself.

“Please, don’t hum so loud,” she said, coming out of the bathroom.

He gripped her shoulders and walked her toward the table.

“You brought me home.”

“Yes, but I did keep your sexy lingerie on. I was a good boy.”

“And you brushed my teeth?”

“I did everything a gentleman would do.”

“No gentleman would come into my house and wash me, clean me up, and put me to bed.”

“I guess I should be in the running for being a saint. I’ve also made you breakfast.” Sitting her down into a chair, he handed her the pills and some water.

“I have no reason to drug you.”

“You’re right. I’m sorry. Holy crap, I just accused you of being a rapist. I’m so sorry. I can’t believe I just did that. Honestly, I’m not this big of a bitch usually. My head is killing me, but that is no excuse.”

“Don’t worry about it. It’s … new being accused of that. With regards to the headache, I’ve had plenty of those, which is why you’ve got my cure for the killer hangover.”

She took the pills, scrunching up her nose. “Molly and June are going to want to know what happened on my date.”

“Tell them straight. He was a no-show.”

“And you took his place?”

“You could also tell them what I told you last night.” He made sure his gaze traveled down to her tits. The nightshirt he’d put on her did not hide those beauties well from him.

“You were just being nice.”

“With you, I’m different. I don’t get it. So, you’re a virgin. You’re not used to partying or living it up.”

“I don’t want to talk about this.”

“Max, I’m not talking about this with you.”

“How can you be a virgin at your age? Isn’t that, like, illegal?”

“Stop. Okay, just stop. I get that you enjoyed spending time with me last night. I think we even had fun, but this, between us, is not going to happen.”

She covered her face with her hands. “Oh, my God, you’re, like, completely invading my space and my privacy. This is all my stuff. You shouldn’t be here or anywhere near my things. I can’t believe you. This is so unfair. I don’t even want to think about this right now.” She got up and started walking back to her bedroom.

He wasn’t going to let this pass. He expected her to argue with him, but he couldn’t help but snoop about the girl that had been in his thoughts for so damn long. It was driving him crazy with how badly he wanted her.

Last night, he’d realized exactly how much he wanted her as she deleted her fucking profile. He didn’t want anyone else ever making her feel like shit. If he ever saw this date of hers, he better run in the opposite fucking direction because he was pissed. Royally pissed.

He wanted to hurt everyone who’d ever done her wrong, and that meant himself. He couldn’t believe what a giant dick he’d been, but that was what he was.

Grabbing Aria’s shoulders, he pressed her up against the nearest wall.

First though, he needed to get her to shut up, and so, grabbing her hands, he locked their fingers together, holding her between his body and the wall.

Sliding his tongue against her lips, he heard her groan, and he deepened the kiss, wanting to taste her, needing to. He’d been denying himself for so long, lying to his friends, to everyone, even to himself about his need for this woman. She was in his blood, and he couldn’t stop it even if he wanted to.

All those years ago, he’d been a bastard, but nothing could have ever prepared him for this.

She fired his body, and his cock was so hard and ready for her.

Pull away. She’s not ready.

Pressing one more kiss to those plump, fuckable lips, he stared into her eyes. They were slightly glazed, and he knew he’d taken her by surprise.

“You don’t want to date. You want to call it that, but we both know it’s fucking you want. A nice, fat cock sliding inside you, and giving you what you’ve seen all those women beg for. Dress it up any way you want, it’s not the truth though. It’s far from the fucking truth. When you’re ready for what you want, give me a call.”

With that, he let her go, grabbed his jacket and keys, and left her place. He needed to put some distance between them.

Aria could go on pretending she was some sweet, innocent virgin, but he knew the truth. Her virginity may still be intact, but that didn’t mean she wanted to remain pure. The stuff he’d seen was dirty and it was cold, hard fucking, but she didn’t need to go on a dating site to get it. He was right here, ready and waiting for her, if she wanted him.

Climbing into his car, he drove the short distance to his place. He wasn’t going to let her put herself at risk, not on his watch.

“So how was date night?”

Aria looked up from the batch of brownies she was making to see Molly leaning against the doorframe into the kitchen. She’d been able to avoid a lot of questions up to now.

“Your date didn’t turn up?”

“That bastard. Did he even text you or something?”

“Why didn’t you call us? We would have hung out with you. You wouldn’t have had to be alone.”

This was the part she wanted to avoid. Lying wasn’t something she enjoyed to do and especially with Molly and June. They had become really close friends with her, and she hated the thought of even telling the smallest of white lies.

“You didn’t have to worry. Max was there.”

Aria didn’t know if her face was on fire or not. “Yes. He was the perfect gentleman.” Her memory hadn’t abandoned her at all. She remembered every single minute detail, even down to the fact she had spewed up in his car.

She winced thinking about it.

His car had t

o stink. She must talk to him about that. Offer to clean it or something.

He hadn’t come back to walk her to work, so she had plenty of the morning to think of her own problems inside her head.

She added lots of chocolate chips to the brownie batter before pouring it out into a large baking tray and placing it in the oven. She took her items to the sink and began to wash them up. 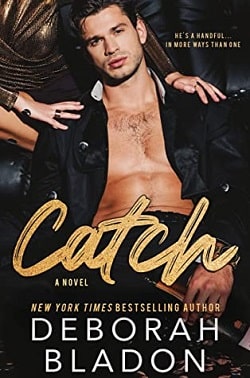 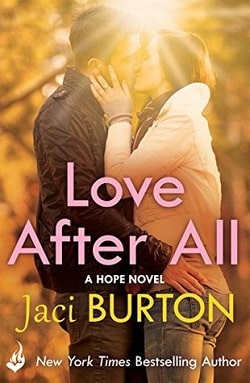 Love After All (Hope 4) By Jaci Burton 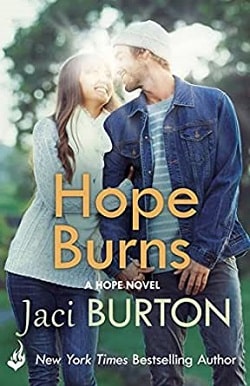