Last visited: Page 28 of When It Rains

Page 28 of When It Rains

“I need to touch you,” I say, hesitantly lifting my hand to his chest.

“You can touch me, hold me, you can do whatever you want to me,” he breathes, lowering his eyes to my lips. “This night is all about you.”

I cover his heart with my hand, feeling his racing heartbeat. I place my other hand over my own chest and notice mine is beating just as fast, but a force inside propels me forward. I’ve never wanted to taste something as much as I want to taste his lips. I pull his face between my hands, closing the gap between us, covering his mouth with mine. The taste of chocolate and marshmallow lingers, making him taste almost as sweet. I take the initiative and press my tongue between his lips. He doesn’t take any coercing, inviting me in for a sensual game of tug of war.

I wrap my arms around his neck and before I know what I’m doing, he’s on his back with my legs straddling his hips. This is all about control for me. I’m controlling the pace, the movement, and how far we go . . . it’s all up to me. It feels good, freeing really, to let myself take what Asher is giving me. It’s the complete opposite of what I went through at Drew’s.

My lips break from Asher’s, and I move to place light kisses along his cheeks and across his forehead then down his neck. His hands aren’t touching me at all as I explore every exposed bit of skin my lips can access. My whole body floods with warmth, which is a completely new sensation for me. The more I touch him, the more I crave his hands on me. In fact, I don’t think I can wait another minute to feel his hands slide over my skin.

“I think it’s your turn,” I state, placing my hands on either side of his head to hold myself up.

“I don’t want to push you to do anything you’re not ready for,” he says, cradling my neck in his hands.

“Asher, I need this,” I respond, pulling my lower lip between my teeth. “I want this.” It’s my declaration of letting go. I’m ready to move forward with my life.

“Are you sure?” he asks, running his thumbs along my jaw.

“Yes, I want you to kiss me and touch me. Don’t hold back,” I plead, yearning to feel his passion. “I’ll tell you when to stop.”

He pulls my face back down, pressing my lips to his. It feels amazing, but I want to go further. I pull away from his grasp, remove my legs from his hips, and lie on my back next to him. “What are you doing?”

“Lying down,” I answer, feeling my heart beat against my chest. I need to know that I’m capable of doing this with someone. And Asher feels like the one for me.

His eyebrows squeeze together as he slowly turns to his side, pressing his chest against my arm. He rotates a little more, allowing half his body to cover mine. “Are you okay?” he asks, combing his fingers through the hair that’s sprawled on the blanket.

“I will be,” I reply, trying to focus on his touch and not the weight of his body.

He lowers his face, lining his left eye with my right. “Have you ever had a butterfly kiss?” he whispers, gently grabbing my hip.

I shake my head, noticing how his eyes sparkle in the moonlight.

“Well, we’re going to change that right now.” He lowers his head a little more, letting our eyelashes brush against each other. The delicate touch is the most romantic thing I’ve ever felt. He continues with my other eye and repeats the exact same fluttering, causing a giggle to escape my lips.

When he lifts himself up and draws another line between his eyes and my mouth, my lips part, waiting for the fireworks to go off in my stomach. And when there’s no space left between our lips, they begin to explode over and over again. He gives me minutes of pure bliss, letting no part of my face go untouched. As his lips press against the sweet spot right below my ear, his palm runs over my breast. There are at least three layers of clothing between us, but my breath is still too difficult to catch.

I almost feel Drew invading me, but I quickly block him out by keeping my eyes focused on the gentle guy who has given me so much. I want this and Drew isn’t taking anything more from me. I’m not going to let him write the rest of my story . . . he has already taken enough.

We stay like that until our noses are so cold that they have no feeling left in them. He doesn’t move further than a few touches and dozens of warm kisses. He’s successfully rewriting my horrible night.

Asher Hunt is bringing the real Kate back.

I HAVEN’T SEEN OR TALKED to Beau in a couple months. They say time heals all wounds and I hope that’s true for us. I miss him but I have hope that one day things will go back to the way they used to be.

Asher says I just need to give him some space, and I hate to admit it but he’s usually right.

Asher has taught me a lot of things.

He has taught me that as long as I’m still breathing, my life isn’t over and that I shouldn’t be so quick to write myself off. I may not have the ability to control everything that happens to me, but I can decide how I react to it. He has taught me that the more risks I take, the less fear I’ll feel over time. If I’m too scared to do anything even remotely out of my comfort zone, I’ll never be able to live life the way it’s meant to be lived.

And he has taught me what love really is.

Love is the most powerful emotion that lives inside us all. And when you have it, it can help diminish all the painful emotions that bury themselves too deep to be seen.

Things are comfortable but exciting between us. He makes me feel protected and secure. He’s breaking down all my walls brick by brick, and the more he takes down, the more I welcome him in.

Tonight he invited me to the lake house, claiming he wanted to cook dinner and watch a movie. A couple months ago, I would have told him no. The mere suggestion that I hang out with him alone in a house would have caused instant panic to take over my whole body.

My hands grip the steering wheel tightly as I drive toward his house. He said he also had a surprise for me tonight, and I have no idea what it could be. Asher can be very mysterious, so I never quite know what he has up his sleeve.

I pull my old Honda into the driveway behind his car and spot him through the front window, diligently working on something in the kitchen. He’s never cooked for me, so I’ve yet to see if he actually has any skills in the kitchen. It can’t be any worse than mine.

When Asher sees me through the window, he nods before disappearing from sight. I take the three steps that lead to the front door, and then lift my hand toward the doorknob, only to have it open before I get the chance. Asher is standing there in a black button down rolled to his elbows and faded blue jeans with a huge smile on his face. I love the way he’s looking at me. Just seeing him smile at me makes my blood pressure skyrocket.

“Hey,” he says, grabbing my hand and pulling me through the door. As soon as it’s latched, he wraps his arms tightly behind my back and buries his nose in my hair. “You always smell good,” he murmurs.

“It’s just shampoo,” I say, laughing and wrapping my arms around his neck. As soon as he lifts his face from my hair, I use my arms to pull his lips closer to mine. I’ve become addicted to his kisses.

That moment we connect is like a million flash bulbs going off in my head. He exposes every part of me, and I can’t get enough of it. He makes me things I never thought I would. His kiss is always very sweet at first, but I know how hungry he is for me the second he traces my lips. I give it to him because I need it just as badly. There’s nothing about Asher Hunt that I haven’t grown to need.

And when he’s done, he always places one gentler, lingering kiss on my lips before he steps back and looks at me with so much adoration in his eyes that I never want to break the visual contact. He gives me worth and purpose. I know I’m falling in love with him, but I’m afraid, at least until I know he feels the same way.

“Are you ready to eat?” he asks, pulling me toward the kitchen.

“I’m starving,” I reply, following him step for step. The mixture of garlic and cheese hits my nose, making my stomach growl. I worked this morning and didn’t have time to grab any lunch, and when I got home I was too nervous about Asher’s surprise to even think about eating anything.

The kitchen is a small galley type kitchen, but there is a small table with two chairs at the far end. He has set out two plates and wine glasses filled with ice water. I can’t help but smile at the arrangement.

“I hope you like Italian. I worked hard on this lasagna all day,” he smiles, waving me toward the table.

“It smells great. What did you put in it?” I ask, taking my seat.

“Well, let me see,” he says, walking toward the garbage. He pulls out a red box and starts reading the back of it. “Bleached lasagna, tomato puree . . .”

I laugh until my stomach muscles hurt. “Stouffer’s, huh?”

“You didn’t really expect me to make a whole lasagna, did you?”

“I didn’t know what to expect when you invited me over for dinner, but to be honest, I kind of expected something like frozen lasagna,” I joke, watching him roll his eyes at me before turning back toward the stove.

“Hey, I made the garlic toast and a salad too,” he says, tilting his head to the side with a teasing grin. I wonder if he even realizes how sexy he is when he gets defensive. I’m tempted to ask him what brand of salad mix and frozen garlic bread he bought, but I leave it alone. His effort is worth more than scratch cooking.

I sit back and take in the view as he pulls everything out of the oven and works to plate our food. The way his brows pull in as he tries to cut the lasagna into perfect squares is one of the cutest things I’ve ever seen. I know he went to school for engineering, and I think he would have been really good at it because of his attention to detail. Maybe I can actually talk him into going back.

“Here you go. I hope it all tastes okay, but if it doesn’t you can blame it on the frozen food manufacturers,” he jokes, placing two plates on the table. 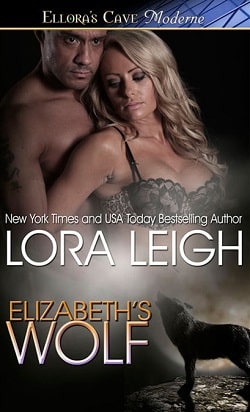 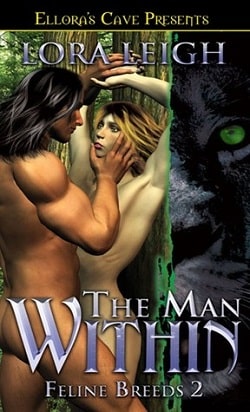 The Man Within (Breeds 2) By Lora Leigh 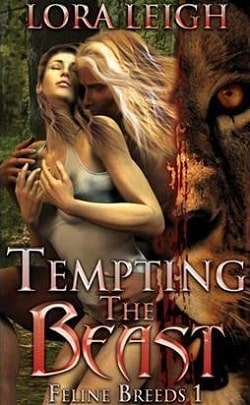 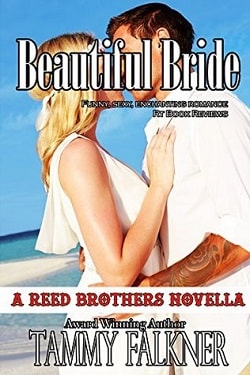 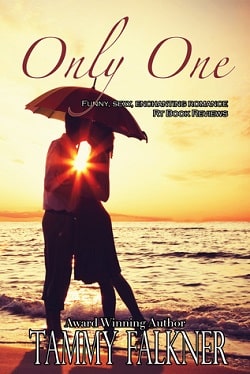 Only One (The Reed Brothers 5.5) By Tammy Falkner 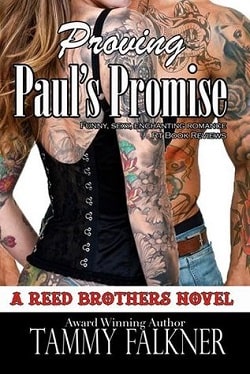 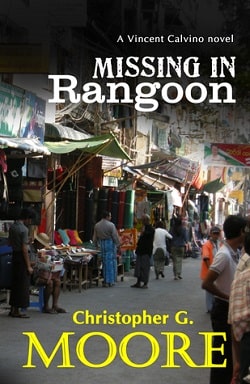 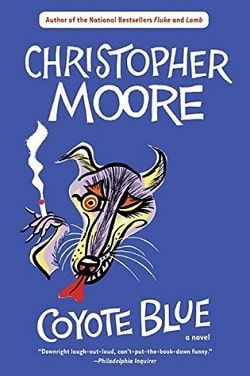