Page 4 of The Innocent's Secret Baby

And Bastiano would be arriving later today.

Raul knew that Bastiano was also a personal friend of Sultan Alim. Raul had considered if that might have any bearing on their negotiations but had soon discounted it. Sultan Alim was a brilliant businessman, and his friendship with Bastiano would have no sway over his dealings, Raul was certain of that.

Raul rather hoped his presence at the hotel might cause Bastiano some discomfort, for though they moved in similar circles in truth their paths rarely crossed. Raul, even on his father’s death, had never returned to Casta.

There had been no respects to pay.

Yet Casta had remained Bastiano’s base.

He had converted the old convent into a luxury retreat for the seriously wealthy.

It was actually, Raul knew, an extremely upmarket rehab facility.

His mother would be turning in her grave.

Raul’s black thoughts were interrupted when the portly middle-aged gentleman sitting to his right made his disgruntled feelings known.

‘Who do you have to sleep with around here to get some service?’ he muttered in well-schooled English.

It would seem that the tourists were getting impatient!

Raul smiled inwardly as the waiter continued to ignore the pompous Englishman. The waiter had had enough. This man had been complaining since the moment he had been shown to his table, and there was absolutely nothing to complain about.

Raul was not being generous in that observation. Many of his nights were spent in hotels—mainly those that he owned—and so more than most he had a very critical eye.

There were certain ways to behave, and despite his accent this man did not adhere to them. He seemed to assume that just because he was in Rome no one would speak English and his insults would go unnoticed.

And so—just because he could—Raul gestured with his index and middle fingers towards the small china cup on his table. The motion was subtle, barely noticeable to many, and yet it was enough to indicate to the attentive waiter that Raul had changed his mind and would now like another coffee.

Raul knew that his preferential treatment would incense the diner to his right.

From the huff of indignation as his drink was delivered, it did.

Raul read through the figures again and decided to make some further calls to try to get behind the real reason the Sultan was selling such an iconic hotel. Even with Raul’s extensive probing he could see no reason for the sale. While the outgoings were vast, it was profitable indeed. The crème de la crème stayed at the Grande Lucia, and it was here that their children were christened and wed.

There had to be a reason Alim was selling, and Raul had every intention of finding out just what it was.

Just as Raul had decided to leave he glanced up and saw a woman enter the dining room.

Raul was more than used to beautiful women, and the room was busy enough that he should not even have noticed, but there was something about her that drew the eye.

She was tall and slender and she wore a taupe dress. Her long blonde hair appeared freshly washed and tumbled over her shoulders. Raul watched as she had a brief conversation with the maître d’ and then started to walk in his direction.

Still Raul did not look away.

She made her way between the tables with elegant ease, and Raul noted that she carried herself beautifully. Her complexion was pale and creamy, and suddenly Raul wanted her to be close enough so that he could know the colour of her eyes. She lifted a hand and gave a small wave, and Raul, who was rarely the recipient of a sinking feeling where women were concerned, felt one now.

She was with him, Raul realised—she was here to have breakfast with the obnoxious man who sat to his right.

The blonde beauty walked past his table, and he could not help but notice the delicate row of buttons that ran from neck to hem on her dress. But he pointedly returned his attention to his computer screen rather than mentally undress her.

That she was with someone rendered her of no interest to him in that way.

Still, the morning scent of her was fresh and heady—a delicate cloud that reached Raul a few seconds after she had passed and lingered for a few moments more.

‘Good morning,’ she said as she took a seat, and unlike her companion’s the woman’s voice was pleasant.

Her greeting was barely acknowledged by the seated Englishman. Some people, Raul decided, simply did not know how to appreciate the finer things in life.

And this lady was certainly amongst the finest.

The waiter knew that too.

He was there in an instant to lavish attention upon her and was appreciative of her efforts when she attempted to ask for Breakfast Tea in schoolgirl Italian, remembering her manners and adding a clumsy ‘per favour’.

Sold To The Bratva Boss By Flora Ferrari

If I Fall (Unraveling You 5) By Jessica Sorensen

Talk Sweetly to Me (Brothers Sinister 4.5) By Courtney Milan 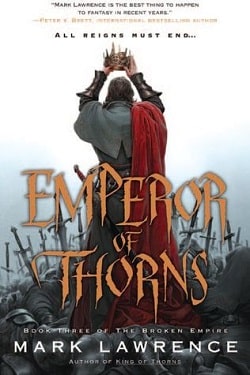 Emperor of Thorns (The Broken Empire 3) By Mark Lawrence