Last visited: Page 68 of Married to a Mistress (The Husband Hunters 1)

Page 68 of Married to a Mistress (The Husband Hunters 1)

‘Angelos phoned me last night. We travelled down in a limousine this morning. Bounce was most impressed. Now, didn’t I tell you that man loved you? Oh, dear, is he listening? ’ Liz said with comic dismay.

‘Your senses are so much more acute than Maxie’s,’ Angelos told Liz cheerfully. ‘To convince her, I had to hire a plane to spell out “I love you” in the sky.’

‘How did that feel?’ Liz asked Maxie eagerly.

‘It felt...it felt absolutely fantastic,’ Maxie swore. ‘It was so imaginative, so unexpected, so—’

‘No, it was the moment I realised that I loved you most.’ And truthfully it had been, when he had unerringly betrayed to her just how hard he found it to put his pride on the line and say those three little words before she said them.

Lunch was a vast buffet served in the ballroom by uniformed waiters. Maxie sipped champagne and drifted about on an ecstatic cloud with Angelos’s arm curved possessively round her. She met his aunts and his uncles and his cousins and his second cousins and his third cousins, and all the names just went right over her head.

And then, when the band struck up the music, rising to the role expected of the bridal couple, they circled the floor and the dancing began. Given an excuse to remain constantly within Angelos’s hold, Maxie was initially content. Curving herself round him like a vine, she breathed in the hot, familiar scent of his body and inevitably turned weak with longing. ‘Any sign of anyone leaving yet?’ she kept on asking hopefully.

At last a trickle of departures led to a generalised flood. They saw Liz back out to the limo. Then Maxie and Angelos mounted the stairs hand in hand at a stately pace. ‘When did you realise you were in love with me?’ she pressed.

‘When you had the chickenpox and I still couldn’t wait to take you home.’

‘But you weren’t prepared to admit it—’

‘Torture wouldn’t have made me confess I was that vulnerable. This is our bedroom.’ Angelos cast wide a door with a flourish.

‘You wouldn’t have had to wait so long to find out if you had kept quiet on the beach the morning after I got drunk.’ In exasperation Angelos framed her surprised face with loving hands. ‘I was ready to tell you. Since I was painfully aware that I had got everything wrong, and I was feeling unusually humble, I was planning to go for the sympathy vote...and what did you do?’

‘I told you about my godmother’s will... I think I’ll give my share to Nancy’s favourite children’s charity.’ She stared dizzily into dark eyes blazing with love and gave him a glorious smile. ‘I had to tell you about the will some time, but I was just trying to save face. I didn’t want you to realise how much I loved you—’

‘I’m the love of your life,’ Maxie reminded him rather smugly as she flicked loose his tie and slid his jacket down off his broad shoulders with the intent air of one unwrapping a wonderful parcel. ‘And you’re the love of mine.’

Angelos brought her down on the four-poster bed with a husky laugh of amusement. ‘Let me remind you of what you said in your list. Chauvinistic, bad-tempered, selfish, unromantic, insensitive, domineering—’

‘A woman always reserves the right to change her mind,’ Maxie inserted before he could get really warmed up.

Black eyes were burnished to pure gold as he met her dancing eyes. ‘You may be gorgeous...but I think it was your mind I fell in love with...all those snappy replies and sneaky moves, agape mou.’

‘To think I once thought you were cold.’ Maxie ran a tender loving hand over his hair-roughened chest. ‘How many children are we going to have?’ she asked.

Angelos gave her a startled smile of appreciation that turned her heart over and inside out. ‘You want my baby?’

Maxie nodded. The prospect just made her melt

And then he took her readily parted lips with urgent, speaking hunger and the passion took over, gloriously reaffirming their love for each other.

Ten months later, they had their first child. Maxie gave birth to a baby girl with blue eyes as bright and bossy as her own. Angelos took one look at his daughter and he just adored her too. 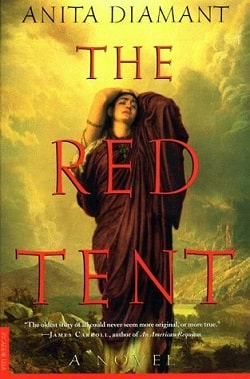 The Red Tent By Anita Diamant