“This is not garbage. This is the truth, and you just need to expand your mind.” I point the remote at him, letting out a huff. My cousin July got me hooked on this show, and ever since I watched the first episode, I’ve become an addict.

“Aliens, babe, seriously? Ancient Aliens? What the ever-loving fuck is that?”

“The government has been covering up the secrets of the universe for years. These people,” I point back at the TV, “are letting us in on what’s really been going on for centuries.”

“That guy there?” He points at the TV, and I look at the screen. Okay, so he looks a little strange with shaggy brown hair and beady eyes, but that doesn’t negate the fact he’s a genius and I may have a little crush on him.

“Can we find something else?”

“No, this is the newest season and I have to catch up. And then I want to watch Naked and Afraid.”

“Naked and Afraid?” His brows snap together, and I roll my eyes.

“Have you been living under a rock? It’s only one of the best shows in the world.”

“I’m seeing we have different tastes in TV,” he mumbles, looking at me like I’m crazy.

“Whatever. You’ll see,” I mutter back, pressing play on the DVR and turning back to watch my show, all while resting my elbows on my knees which are crossed in front of me.

“If I’m forced to watch this garbage, you’re going to cuddle with me.” He tags me around the waist then settles me against him. I don’t put up a fight; there is no point. Besides, I like cuddling with him, even though his constant grunting and disbelieving huffs during my shows are annoying.

“Can I have the remote now?” he asks, three hours later, when Naked and Afraid comes to an end.

“Yeah.” I sleepily hand it to him then watch, with my cheek to his chest and my arm thrown across his abs, as he flips through channels until he finds Conan O’Brian and drops the remote to his stomach. “And you thought my shows were lame.” I cuddle closer, feeling his chest shake under my cheek as my eyes slide closed and I fall asleep.

Waking suddenly when the doorbell rings, I roll across the bed and off, landing with my feet to the floor. “What the fuck?” He sits up, looking at the clock next to the bed, and my eyes follow his, seeing it’s just two minutes after seven. I totally forgot about telling my brother, Jax, to bring my cat, Leo, back to me this morning before he went to work, and I know that’s him at the door. And under no circumstances do I want him to see Dillon in my house.

“Stay here.” I point at him while skirting the bed and slipping on one of my zip up hoodies over my sleep shorts and tank.

“Stay here. Has she lost her damn mind?” I hear him ask as I open the door, closing it behind me as I slip out. Jogging down the hall to the front door, I open it just an inch and poke my head out.

“Hey.” I squint one eye closed as the early morning sun almost blinds me.

“Sorry about the time,” Jax says, holding a hissing Leo out toward me. “I had to sneak him out of the house before Hope got up.”

“Hey, baby,” I greet my cat, settling him against my chest, kissing the top of his hairless head and hearing him hiss before looking up at Jax once more. “Tell Hope she can come see him anytime she wants.” I smile, using my free hand to grab the edge of the door when it looks like he’s going to try and come in, and his eyes move to my hand.

“I’m going back to sleep before I need to get up for work. I’ll call you later.”

“What?” His hand shoots out, preventing me from shutting the door, and his eyes narrow. “What the hell is going on?”

“Nothing,” I huff. “I’m just jet-lagged. I’ll call you later this afternoon.”

Feeling my face soften, I nod. Most of the time, having a brother is annoying, but I would be lost without him. He’s my best friend, and has been since we were little.

“I’m fine, I swear.” I cross my fingers over my heart.

“Call me when you got time today.”

“Will do,” I agree, shutting the door before he walks off, and then flip the lock back into place.

Holding Leo up in front of my face, I walk down the hall toward my room, murmuring, “I missed my baby so much,” as he hisses. His paw swipes at a piece of my hair hanging near my face. “Are you mad at Mama?” I ask, and he hisses again, making me smile. He’s always mad when I leave him for any length of time. Okay, he’s really always mad, but I love him. 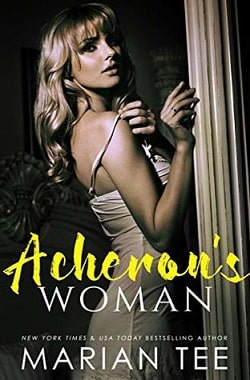