Page 15 of To Defy a Sheikh

She cocked her head to the side, a frown tugging down the corners of her lips. “About some things,” she said. “Survival being chief among them. I don’t think I could have lived through what I lived through without a certain measure of passion for breathing. If I hadn’t felt burning desire to keep on doing it, I probably would have walked out to the desert, lain down on a dune and stopped. And then there was revenge. I’ve felt passion for that.”

“And that’s where we differ. I don’t want revenge, because the purpose it serves is small. I want to serve a broader purpose. And that’s why thinking is better than passion.” Passion was dangerous. Emotion was vulnerability. He believed in neither.

“Until you need passion to keep air in your lungs,” she said, so succinct and loud in the stillness of the room. “Then you might rethink your stance on it.”

“Perhaps. Until then…in my memory, passion ends in screams, and blood, and the near destruction of a nation. So I find I’m not overly warm to the subject.”

“But you don’t anticipate us having a marriage with passion?” she asked.

He looked at her again. She was beautiful, there was no question, and now that she didn’t have a knife in her hands it was possible to truly appreciate that beauty. She had no makeup on today, but she was as stunning without it as she’d been with her heavily lined eyes and ruby lips.

“Perhaps a physical attraction,” he said.

He wasn’t sure how he felt about that. The truth of the matter was, he’d given up women and sex that day his family had been killed. That day he’d been handed the responsibility of a nation full of people.

His father had been too busy indulging his sexual desires to guard his family. To guard his palace. And then he had seen what happened when all control gave way. When it shifted into unimaginable violence. When passion became death.

He’d turned away from it for that reason. But he’d known that when he married he wouldn’t continue to be celibate. He hadn’t given it a lot of thought.

But he was giving it thought now. Far too much.

Those beautiful eyes flew wide. “I hardly think so.”

“That has nothing to do with sex, habibti. Sex is about bodies. It is black-and-white, like everything else.” She looked away from him, her cheeks pink. “You expect a celibate union      ? Because that will not happen.We need children.”

Something changed on her face then. Her expression going from stark terror, to wonder, to disgust so quickly he wondered if he was mistaking them all. Or if he’d simply hallucinated it. “Children?”

Now her unpainted lips were white. “Your children.”

“And yours,” he said. “There is no greater bond than that. No greater way to truly unite the nations.”

Samarah was at a loss for words. She’d been thrown off balance by Ferran’s sudden appearance, and then…and then this talk of marriage. Of passion and sex. And then finally…children.

The word hit her square in the chest with the force of a gun blast.

Terror at first, because it was such a foreign idea.

Then…she’d almost, for one moment, wanted to weep with the beauty of it. Of the idea that her love might go on and change. That it might not end in a jail cell of Ferran’s making. That she might be a mother.

On the heels of the fantasy, had come the realization that it would mean carrying her enemy’s baby. Letting the man who had ordered her father’s death touch her, be inside of her. Then producing children that would carry his blood.

You wouldn’t be alone.

No. She couldn’t. Couldn’t fathom it.

And yet, there was one thing that kept her here. That kept her from fashioning a hair pick into a weapon and ending him.

When he’d said, cold, blunt, that her father had killed his, that he had been responsible for the death of his mother as well, she’d realized something for the first time.

She would have done the same thing he had done. Given the chaos her father had caused, were she in Ferran’s position, the newly appointed leader of a country…she would have had her father executed, too.

That shouldn’t matter. The only thing that should matter was satisfying honor with blood. She could have sympathy for his position without offering him forgiveness or an olive branch of any kind.

But it sat uncomfortably with her. Like a burr beneath her rib cage. And she didn’t like it. But then, she liked this whole marriage thing even less than the murder thing.

The Mister By E.L. James

In His Keeping (Slow Burn 2) By Maya Banks

The Vacation - Don't Hate Me By Jamie Knight 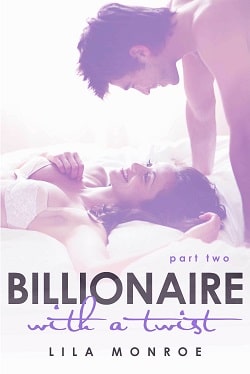 Billionaire With a Twist - Part 2 By Lila Monroe