“What was your mother’s name?”

“Another literary name,” she noted, seemingly pleased by the fact. “You know, my son, Parker, named his daughters after his favorite southern authors—Eudora Welty, Carson McCullers, and Harper Lee.”

“He must’ve loved books. My mother did.”

“Yes, that’s how he got to know my mother. She was an editor. They met while she was helping him with his novel.”

“Zora . . .” Marietta paused to think back, then regretfully shook her head. “I’m sorry, but I don’t recall Parker ever mentioning your mother’s name.”

“We rarely discussed his friends or personal life. So that’s not to be taken as a slight in any way. You see, my son and I had a serious falling out after his first divorce. Later we reconciled, but from that point on it was tacitly understood that his personal life was not up for discussion. And, to be honest, I was more comfortable being kept in the dark. Let’s just say Parker was a very handsome and charming man. He had three wives, you see.”

“And you have three granddaughters.”

“Tell me about your mother,” she said.

This was a subject he could speak about readily. A small smile crossed his face as he pictured his mother in his mind. “She was lovely in every way. And bright. She was the publisher of Atlanta magazine until she died.”

He nodded in agreement, then looked idly around the room in the heavy silence.

“Reverend . . . Atticus, do you have something in particular you’d like to ask me?”

Atticus felt the heat of her searching stare. “Not particularly. As I said, my mother was a friend of Parker’s and I was curious to see where he grew up.”

Mrs. Muir looked at her hands. “I think, perhaps, an intimate friend.” She lifted her eyes.

He met her gaze sharply. “I didn’t say that.”

As they stared at each other, his blue eyes searching into hers, Atticus knew without a doubt the game was up. This was a wise old bird, biding her time.

To her credit, she released a knowing smile that revealed more compassion and wisdom than he felt he deserved, under the circumstances.

“Atticus, you are the very image of my dear son, Parker. Tell me, child. Did you come here, to Parker’s home, searching for answers? If so, I have a burning question of my own.” She closed her eyes as though to gather her strength, then, opening them, she held his gaze and said with heart, “Are you my grandson?”

Atticus’s defenses were shattered. The vague responses he’d meant to give melted away under the heat of her gaze. Open and vulnerable, she looked at him. She’d laid her cards on the table and now waited for his response.

Her hand flew to her lips as her composure fled. Tears filled her eyes, appearing as two deep lakes about to overflow. With the truth out, Atticus felt her stare intensify as she examined him with open curiosity, even hunger, clearly searching for signs of her son in his son.

Atticus felt uncomfortable under the scrutiny. “Are we really that much alike?”

She smiled with self-effacing charm. “Enough that I thought you were him when I first saw you. Scared the living daylights out of me, I must say.”

“Alike, except with a different skin color,” Atticus said wryly.

“Well, yes.” Marietta leaned forward and peered into his face. “Now that I look at you more calmly, there are differences, of course. The nose isn’t his. Your forehead might be a bit broader. And though he was tall, he wasn’t as tall as you. But overall the resemblance is absolutely profound. Your facial structure, slender frame, and of course your eyes. It’s the Muir blue color,” she said with a hint of pride.

Atticus listened, soaking in the information like a dry sponge. He’d not looked like Tyrone and only somewhat like his mother. “I had always wondered where I got my blue eyes from.”

Marietta shook her head, seemingly dazed. “But this is extraordinary! I wonder why he never told me. You’re his only son. My only grandson.”

“My mother asked him not to tell anyone. I have to respect him for keeping his promise. He never met me. I didn’t know about him, either.”

“My mother died a few months ago. After her estate was settled, her lawyer sent me, per her instructions, a letter she’d written to me before she died.” He steepled his hands. “It was a shock.”

“I didn’t see it coming.” He paused at the understatement. “My parents were separated when she met Parker. My father was working as a lawyer in Atlanta. My mother went to New York to work as an editor for a major publishing house. According to the letter, it was there she met your son. I gather she was helping him with his book, they spent a lot of time together, and one thing led to another.” Atticus shrugged. “She says they fell in love.”

Marietta’s eyes widened with a sudden realization. “Did your mother work for Georgiana James?”

“Yes, I believe that was her name. She was, according to my mother, a cruel woman.”

Marietta’s eyes narrowed. “It was Georgiana,” she said with certainty.

“In any case, once her boss found out about their affair, she fired my mother and divorced your son. Only, by this time my mother was pregnant. She returned to her husband in Atlanta, where they reconciled. He raised me as his own son.”

“When did Parker find out he had a son?”

“My mother wrote to tell him before I was born. You should know, he offered to marry her.”

Marietta’s face was somber. “It was the honorable thing to do.”

“For a white man to marry a black woman in your society here in Charleston almost thirty years ago, it would have meant a scandal. In New York? It might have brought a few raised brows, but they could have done it. My mother loved your son, and he loved her. But she didn’t want to marry him. She chose to go back to her husband. My real father.” 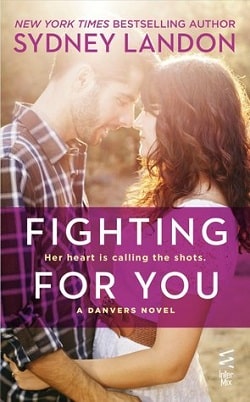