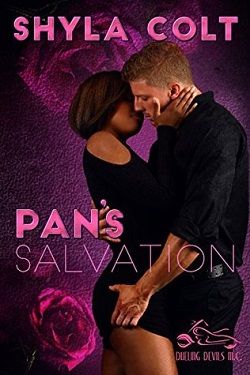 Lark Rosario spent her entire life bailing her sister, Robin out of trouble. But this time, Robin’s addiction has them both in over their heads. Lark’s working as a drug mule to gain her sister’s freedom from a cartel when she gets caught in a shootout between rival bikers. Captured and given to the biker she injured, she's at the mercy of a man she doesn’t know.
Battling addiction and self-loathing, Dueling Devils member, Hartley “Pan" Sumner can barely care for himself. The last thing he expected to be was a protector. Then he looks into the brown-eyed gaze of a woman struggling to survive and recognizes a kindred spirit, searching for freedom. Desperate for redemption, he takes his little bird under his wing and shows her the beauty of his darkness.

She’s trapped by her situation, and he’s running from his past. Together they may just have a future.