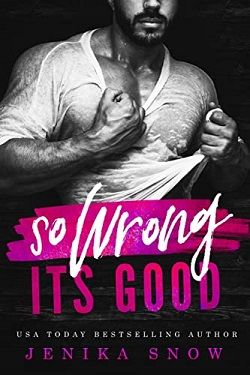 So Wrong It's Good: A Forbidden Romance

So Wrong It's Good: A Forbidden Romance

At twenty years old Lake Heart was inexperienced in all things male related, but that didn’t stop her from wanting Reese, a man who had his heart locked down.

He was a decade older than her, ex-military, powerful, and he made her feel wholly feminine.

It was also a little forbidden to be together, a little wrong, but he wanted her just as desperately as she did him.

Reese shouldn’t have wanted Lake, not in any sense of the word. Being with her would look bad, be seen as inappropriate. Not to mention he didn’t need to get involved with anyone, not when he’d put his divorce behind him and was carving out a new life for himself.

But that didn’t stop him from watching her, from being a lewd voyeur where she was concerned. He couldn’t stop himself and didn’t care enough to try.

And telling himself not to make Lake his was easier said than done. He found himself not caring about the repercussions claiming Lake would have, especially when she wanted him as much as he wanted her.

But would one night of pleasure ruin a future they could have together?