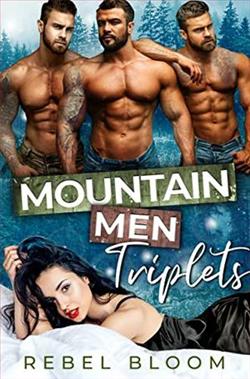 Relationship Status: It’s complicated
Dating three triplet brothers might sound like fun, but I’m hiding a dark secret that could tear them apart.

I’ll never regret my one-night stand with Julian.
He gave me a son–one that he knows nothing about.
Gruff, damaged, and moody enough to cause whiplash, Julian Steele is everything I should stay away from.
But having to keep this secret from him has been hell.

We promised each other that "one night" would just be fun and meaningless.
But when he finds out I’m dating his two brothers, I realize just how cruel this bad boy can be.

Isaac and Blake have treated me like a queen ever since I moved to their small mountain town.
Something I never knew I needed.

Isaac, a sturdy rancher, has Julian’s physique but is charming and gentle.
My heart feels safe with him.

Blake is my new boss, and it was never my intention to make my love life even more complicated.
But I hilariously threw myself at him thinking he was Isaac and sparks flew... to say the least.

I shudder at the thought of them finding out the truth about my son.
Julian will hate me, and Isaac and Blake may never want to see me again.
Or worse, it could drive these brothers apart.

And with their psycho ex-girlfriend trying to stir up the drama,
will my secret baby be the final nail in the coffin for the Steele brothers' relationship?