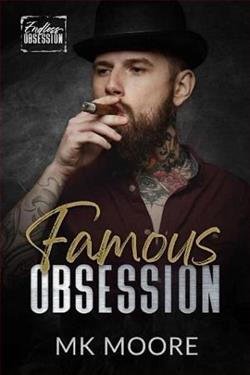 I knew of her before this. Of course, I did. Everyone knows of her, but no one really knows her. I saw her one time on the big screen, and I knew I would marry her one day. From that day forward, everything I did led me here to this moment. She is the reason I became an actor. Over the last five years, I’ve done things that I am not proud of, but it was all for her. Depraved, dark, illegal things that she doesn’t know about. Hollywood is a small town, it was only a matter of time before I made her mine.

I've been acting since I was a little girl. I'm Hollywood Royalty, and I don't take that lightly. Nothing I've done has ever been just for me, but don't get me wrong. I love my job. I love my fans. I love everything about this life. Even the dark stuff. The stuff you only hear about after someone is gone. Stalkers? Yeah, I've got those. But nothing compares to the one. The man who has been sliding into my DM's and my mailbox for years. I don't know him, at least I think I don't, but I want to.

This summer, join Darren & Jenna onset of the epic Regency film, Kept by the Keeper, where an endless obsession grows and a lifetime of happiness ensues.

This is a safe, over-the-top romance with a HEA. It has stalking tendencies with a dark and dirty love like you've never seen.

That prickly feeling on the back of your neck that says someone is watching you? It’s me. And I’m never going to stop.

50 Most Popular Books Published in 2020: Part 1
War of the Fifth Coalition
War of the Third Coalition
The Russo-Persian War (1804–1813)
Ads by AloneReaders.com