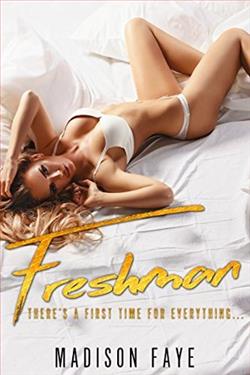 I’m going to be her first - no matter what.
She’s the sweet temptation from down the street. My buddy’s little girl. I watched her grow up, but now I’m obsessed with taking her, claiming every part of her, and making her mine.

I know it’s wrong as hell. She’s off-limits and totally innocent, but I can’t tame my desire for her, not when one blink of those wide eyes gets me hard as a rock.

She ignites something inside of me, something that won’t be tamed and won’t be f*cking stopped. I’m going to be her first, and claim every single part of her. I’m going to breed her and make her mine, and I don’t care who knows.

College is for firsts…
He’s my forbidden fantasy, the unbelievably hot retired rock star next door. He looks at me like I’m already his, and it’s hard to ignore the pure, raw need he brings in out in me.

I’ve been saving my v-card until college for the right man, but I know it’s a matter of time before I let him take it all, even if he’s more than twice my age.

Then again, there’s my best friend - my other half, my confidant. We’ve done everything together our whole lives. Can I really lose it without her? And what happens when “friends” turn into so much more?

What happens when you’ve got urges and feelings like this for two people?

50 Most Popular Books Published in 2020: Part 1
War of the Fifth Coalition
War of the Third Coalition
The Russo-Persian War (1804–1813)
Ads by AloneReaders.com