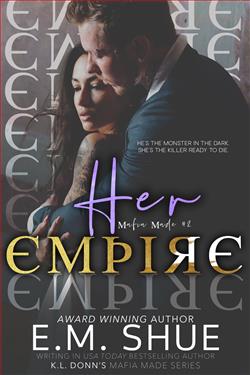 Anatonia is a killer. Until Vitaly comes for her. Now she will protect the hitman. Anatonia is the head bodyguard for the Morello Mafia. She will kill anyone that comes close to Posy for Natale Morello. It's what she was raised to do. Kill. She's one of the deadliest hitmen to come out of MI6, KGB and even survived special forces Marine training at a young age. But few know she is the niece to the head of the deadly Bocharov Russian family. That her uncle raised her to destroy the Morello's. Because she defied him, he's sent his best killer to kill her. Vitaly is the monster in the dark. He’s the one the Bocharov family sends to end their enemies. He thinks he's only been sent to kill a rival family’s enforcer. What he doesn’t know is she is the illegitimate niece to his boss and now the woman he will do anything for. Even defy the family he’s bled for. He’ll protect her and help her conquer her enemies. The Bocharov Family has declared war against Anatonia, and she will end them. Can Vitaly hold the woman he was born to protect? Will Anatonia still be standing when the blood of an Empire is destroyed?
Will they kill the Empire she was meant to lead?