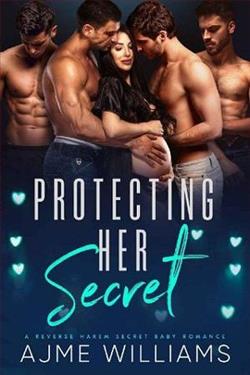 I kept our baby a secret thinking that it was the right decision.
And it was… until I found myself in a mess greater than any Hollywood movie could ever portray.

Working as a PR executive for a brilliant director was supposed to be fun.
Little did I know that I’d meet not one, but four men of my dreams.

Ryan, the country’s superhero, is my baby daddy. His past might make him feel unworthy of love but he has every piece of my heart beating for him.

Kai, his co-star, is the exact opposite of Ryan. He doesn’t know that his grumpiness makes him that much more endearing.

Thiago is famous, to say the least. Landing a superhero franchise changed everything for him except for one thing – his intense stare.

Michael completely switches on-screen. He could go from being introverted to a full-on alpha within seconds.

Each of them has me swooning over their chiseled abs and charming smiles, and it’s putting my job at risk.
It’s also affecting my sanity because I’m having to lie to Ryan.
He has no idea about his son and I have no clue how he’d react after finding out.
Would he hate me?
Will it end my career?
What if I lose my child? Or the only source of income that lets me care for him?

My life is hanging from a thread, and only time will tell if I’m able to survive the passionate ordeal…