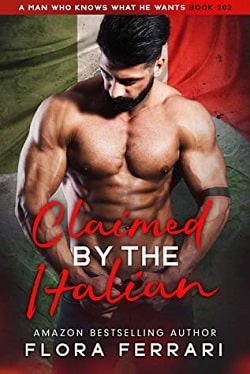 Claimed by The Italian

Claimed by The Italian

When you've found the only woman you've ever wanted to be yours, the wrath of the mafia is a risk worth taking.
Lydia has traveled halfway across the world to be a maid, but it was worth it, and if landing in Italy hadn’t been enough to convince her, the gorgeous Italian hunk welcoming her into her new home will make sure she never looks back.

As soon as she sees his smouldering eyes and his sexy dark hair, she knows her life will never be the same again.

Lorenzo has never wanted anyone before -- not like this. The second he sees Lydia on his doorstep, he knows he has to have her, and he’s determined to make it happen.

Electricity surges between them as soon as they lock eyes, but there’s a problem… Lorenzo’s in the mafia, and his sister, Bianca, is determined not to let her brother become distracted from his work. After all, their lives depend on it.

At just 21, Lydia has no experience with men, but the chemistry connecting her to Lorenzo takes over: she doesn’t need to know a thing. Every fiber of her body knows what to do.

Lorenzo knows there’s a danger in investing everything in one girl, but he’s never been more sure of anything: this woman should be his, and he’s going to make it happen… no matter what the cost.

Dive into breathless passion as Lorenzo prepares to sacrifice his whole life to make sure Lydia belongs to no one but him.

Claimed by the Italian is a steamy instalove possessive alpha romance with a satisfying HEA. No cheating, no cliffhangers… just next-level passion and a story burning with desire.