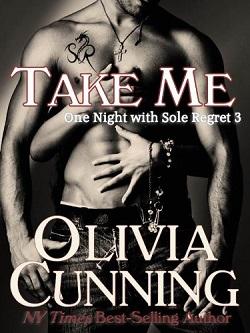 Take Me (One Night with Sole Regret 3)

Series: One Night with Sole Regret

Take Me (One Night with Sole Regret 3)

She is one woman he should never touch...

Sole Regret’s enigmatic vocalist, Jacob “Shade” Silverton, is a consummate womanizer, but even he knows better than to get involved with one special woman from his past. Mixing friendship and pleasure can only lead to a broken heart, and he’s suffered enough heartache to swear off relationships for a lifetime.

He is one man she has always desired...

Amanda Lange knows all about Shade’s naughty reputation, but that doesn’t stop her from wanting to dive into the gorgeous rock star’s arms and into his bed. She convinces herself that one night of passion won’t complicate their friendship, but can she convince him of that?

They’re both playing with fire.

Neither of them realized how far one kiss would take them. As the flames of their passion ignite with the intensity of an inferno, will either of them escape the experience without being burned or will both be branded fool enough to take a chance on a relationship that was marked for ruin before it even began?