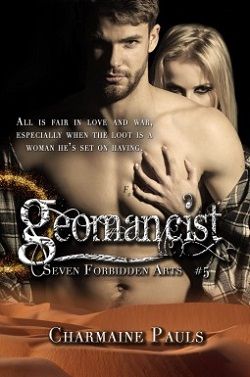 All is fair in love and war, especially when the loot is a woman he’s set on having.

Sean Rivers lives with a dangerous secret. He possesses a forbidden art. As geomancist, it is in his power to destroy landscapes with earthquakes and volcanoes. Knowing his kind is hunted by forces of both good and evil, Sean’s job as mixologist in Cartagena, Colombia is the perfect cover. Until Asia, a zesty beautician walks into his life and wrecks the very laws of physics.

When Sean and Asia compete for the premises where Sean intends to open his cocktail bar, he pulls out all the stops to win the challenge … to Asia’s detriment. Together they end up catering for the guests of a drug baron who rented Isla del Pirata for a week-long birthday celebration, and the kingpin has no intention of letting Asia leave. Ever. If Sean is to rescue her, he’ll have to use his art, blow his cover, and maybe even his life.