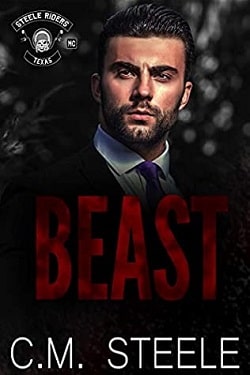 A witness to a crime, Mary Stark lands herself in Steeleville, under the care and protection of DA William “Beast” Brandon and the Steele Riders.

Unbeknownst to her, she’ll be living with Beast until the trial. She’s been warned of his gruff and surly behavior when it comes to people invading his home and messing it up, but accidents happen.

Bad timing, a surprise arrival, no towels, and a lot of emotions gives one hell of a first impression for Beast and Mary.

They both feel the sizzling heat between them, but she’s under roof, and it would be unethical for him to stake his claim.

Can he hold out until the trial?

Will someone try to steal their happily ever after?