“Sorry,” she said with another forced smile. “I think I’m beginning to fade. Had an early start.” It wasn’t a total lie; she’d been at the studio at four a.m. as usual, but she wouldn’t be going to sleep so soon after eating.

Which, she belatedly realized, Noah knew after her comment the night he’d made her spaghetti. Instead of calling her on it, however, he got up. “I’ll help you clean up.”

“Don’t worry about it.” A yawn cracked her mouth. “Drat, sorry again.” 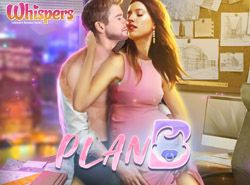 This time, his smile reached his eyes. “You really are beat.” Leaving the dishes, he walked to the front door, her by his side. “Do you think you’ll be up early again tomorrow?”

She made a face. “Three twenty on the dot, I’m guessing.” It would take at least a week to break out of that rhythm.

“Want to come do something with me?” Shoving his hands into the back pockets of his jeans, he wouldn’t quite meet her eyes. “Since we’ll both be awake at that hour.”

Kit frowned. “What would we do in the middle of the night?” It wasn’t until the words were out that she realized how suggestive they sounded.

Thankfully, Noah didn’t seem to notice. Rubbing the back of his neck, he said, “I was thinking I’d pick you up at four thirty, and it’d be just before six and getting light by the time we got there.”

Kit wasn’t certain she was reading him right—Noah was never hesitant or nervous… but he was sure giving that impression right now. “Where?”

Shoving both hands back into his pockets, he finally met her gaze, a slight flush on his cheekbones that floored her, smashing right through her defenses. Noah never blushed. It was simply not in the Noah St. John repertoire. Except he was rocking on his heels and that color hadn’t receded.

He was impossibly gorgeous.

Kit felt like a parrot, but all she could say was, “A flight?”

“Yeah, I, um, got my pilot’s license, bought a small two-seater plane.”

Her mouth fell open. “Since when have you been taking flying lessons? Do the guys know?” No one had ever mentioned it.

“A while.” He ran a hand through his hair, gave her that lopsided grin, only this time it held a piercing edge of vulnerability.

At that instant, he looked younger than she’d ever seen him.

“You’re the only one who knows. I didn’t want to say anything until I actually did it,” he added. “Had the license, I mean.”

Wonderfully astonished and fighting the urge to kiss him, he was so beautiful right then—so her Noah—Kit just stood there.

His smile began to fade at the edges, daylight swallowed by night. “You don’t have to. I just thought—”

“Yes,” she interrupted. “Yes, I’d like to.” She couldn’t kick the gift of trust back in his face… and she’d promised to be his friend.

As she’d already admitted, no matter how much he’d hurt her, her heart would break forever if Noah was no longer in the world. That didn’t mean she was going to fall back into the trap of loving him. It was time she said good-bye to a dream that had held her hostage even when she’d believed herself free: beautiful, gifted, broken Noah St. John was simply never going to love Kathleen “Kit” Devigny.

Sliding to the floor with her back to the door after Noah left, Kit stared at the hands that always wanted to touch Noah when he was near and shook her head. Her tears were silent this time, the hot droplets erasing the last traces of the dream.

Noah managed to sleep that night, thanks to a trick he’d discovered on the Internet. He’d put in a search term in desperation one night and hit on a video of rain falling in someone’s backyard, and before he knew it, he was asleep in his chair. He’d woken five hours later with a stiff neck and the video still playing in a loop.

The rain sounds didn’t work every time or even mostly, but they did that night. Thank God. He’d never have risked taking Kit up otherwise. He had an excellent reaction time, but fatigue could dull even the best instincts.

Awake in plenty of time, he showered and shaved, then pulled on his favorite old jeans and a dark gray T-shirt, wondering what Kit would think of his little Cessna. White with blue markings, it was parked in a hangar beside a small private airfield. As far as the sixty-something owners of the airfield and hangar were concerned, Noah was simply another weekend warrior who worked in the city and came to play with his toy in his off time.