“So?” he said once they were safely out of the lot and away from prying eyes.

A squeal erupted from the passenger seat. “Esra loved me! He was trying to pretend he was cool and not really into me, but I could see the fireworks going off in his head. He told me he’s seeing Abigail this afternoon, but I think he just wants negotiating power when it comes to the contract. I nailed it, and we both know it!”

Kit finally stopped to take a breath. “We spoke for twenty-five minutes afterward, and it was serious, in-depth script talk. He asked me if I could work with Garrison given the politics if Abigail doesn’t get the job, and I said I’m a professional.” 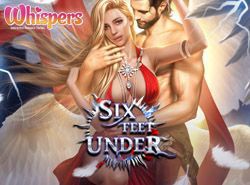 Another gulped breath. “I can feel it, Noah. Only reason it won’t be mine is if he plays politics, and I don’t think he will. Esra might be an arrogant SOB, but he’s a brilliant one who won’t put his name on anything about which he isn’t passionate.” She blew kisses over to Noah. “And thanks to you, Abigail and I are even on the publicity stakes, so that’s become a nonissue.”

“You’re the best, Kit. Period.” He loved seeing her like this, so happy and excited and confident. “Let’s pick up a bottle of champagne on the way home, have it chilled for when the news comes.”

“No.” A severe sound. “There’s being confident, and then there’s jinxing things.”

“Right.” Laughing at her adorable scowl, he guided the Mustang into a turn. “I keep forgetting how superstitious actors can be.”

“Don’t knock it. I was once in a small live performance of the Scottish play.” Shivering, she hugged herself. “Never again. That play is genuinely haunted.”

Reaching out, he flicked her nose. “And you, Katie, are genuinely cute.”

“Say that again and I’ll bite you.”

Much as he wanted to keep the upbeat mood, he knew he had to tell her about the flyer. As she’d said, she had to know to protect herself. Jaw and neck muscles tense, he said, “Your stalker has access to the lot.”

Silence from the passenger seat, then an exhale. “What did he do?”

He told her. “You don’t need to look at it,” he said when she would’ve reached for the glove box. “I haven’t hidden anything.”

Nodding in a trust that made him feel like he’d won the lottery, she leaned back in the seat. Her voice, when it came, was more focused than angry or scared. “It makes sense that he’s in the business.”

“When my place was broken into? It was while I was at a small party at the house of a camerawoman from my Primrose Avenue days. Not a lot of people knew I was gone. I guess he could’ve just been watching my place, but that wasn’t the only suspicious incident.” She tapped her finger on her knee.

“Once, I came back to my trailer on set and it felt as if someone had rifled through my purse. Nothing was missing, so I figured I was just being paranoid, but I changed the locks on the gate, the house, and the car anyway, despite the cost. A few days later, I found scratches on my car lock, as if someone had tried to use a key.”

Noah gripped the steering wheel with bruising force. “You tell the cops this?”

“Sure—and studio security at the time. But you know how many people there are on a lot at any one time.” Pragmatic words. “It’s a miniature city. And since I didn’t get any threatening notes or anything stalker specific, I figured it must’ve just been an opportunistic thief.”

“You’re taking this a lot better than I am.” He wanted to strangle the creep.

Patting his arm, she said, “I’ve had a lot longer to get past the angry stage. These days I concentrate on being smart, on not giving him any opportunities, or my emotional energy.” She relaxed into her seat. “Have you spoken to Abe since we got back?”

“This morning after breakfast.” The keyboard player was not in a good headspace, and Noah had intended to bully him into coming over so he wouldn’t be alone with his demons, but someone had beaten him to it. “He’s staying with David and Thea.”

“She wanted to go home, but Fox and Molly convinced her to stay with them. Her face needs to heal so she can go out, and they’re worried because her ex has keys to her place.” After the way Jeremy Vance had hurt Sarah, no one wanted to take any chances by leaving her alone in a space he could access.

“I’ve met guys like him before,” Kit said, tone grim. “They’re cowards who wait till they get their victims alone.”