Last visited: Page 17 of Married to a Mistress (The Husband Hunters 1)

Page 17 of Married to a Mistress (The Husband Hunters 1)

Angelos flung his arrogant dark head back, black eyes thudding like steel arrows into a target. ‘The desire between us was honest and mutual and very strong. Do you expect me to apologise for a hunger you answered with a passion as powerful as my own?’

‘I’m very straight...what you see is what you get. You put out conflicting signals and then back off. You have the problem,’ Angelos informed her in cool condemnation. ‘Don’t put it on me. When I became an adult, I put childish games behind me.’

Although every strained muscle in her taut length ached, Maxie remained as outwardly poised as a queen surveying a less than satisfactory subject. But violent loathing powered her now. It took its strength from her shame that she had allowed him to touch her at all.

‘I won’t say it’s been nice getting to know you over the past twenty-four hours, Angelos...it’s been lousy,’ Maxie stated, and turned in the direction of the lift. 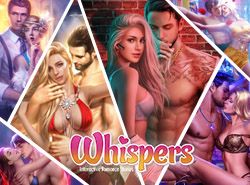 ‘Goddamn you...don’t you dare walk away from me!’ Angelos slashed across the distance that separated them. ‘Who are you, Maxie Kendall, to speak to me like that?’

‘No more...I don’t want to hear it,’ Maxie muttered shakily.

‘This time you will listen to me,’ Angelos raked at her in wrathful forewarning. In one powerful stride he imposed his intimidating size between her and the lift. His lean, strong face hard as steel, bold black eyes hurled a ferocious challenge. ‘Do you think I don’t know you moved in with Leland between one day and the next? You hardly knew him. You came out of nowhere into his life. Do you think I didn’t notice that you weren’t remotely attracted to him?’

Quite unprepared for that angle of attack, Maxie stammered, ‘I...I—’

‘In fact, Leland bored you to death and you couldn’t hide it. You could hardly bear him to touch you but you stuck it for three years all the same. Does that strike you as the behaviour of a sensitive woman with principles? You sold yourself for a wardrobe of designer clothes—’

‘No, I didn’t!’ Maxie gasped strickenly.

‘At no stage did you wake up and say to yourself, “I could do better than this. I’m worth more than this. This isn’t the way I should be living!” ’ Angelos roared at her in a rage of shockingly raw derision. ‘So don’t tell me I got the wrong impression. I trust the evidence of my own eyes and senses. You felt nothing for him. But you put yourself on the market and he was still able to buy!’

Nausea stirring in her stomach, Maxie was retreating deeper into the penthouse apartment, her hands coming up in a fluttering movement in front of her as if she could somehow ward him off. ‘No...no,’ she mumbled sickly.

‘And I was the bloody fool who, even knowing all that, still wanted you!’ Angelos slung, spreading his arms in an extravagant gesture of outrage at her, at himself. ‘I didn’t want to buy you...or maybe I wanted the cosy pretence that it didn’t have to be like that between us...that because you lusted after me too I could gloss over the knowledge that my immense wealth might have anything to do with your presence in my life!’

Maxie was like a statue, terrified to risk a step in case she cracked and broke into shattered pieces. He had forced her into cruel confrontation with the image he had of her. Like an explosion of glass, countless shards pierced her cringing flesh as every painful word drew blood.

‘I’ll never forgive you for this,’ she whispered, more to herself than to him. ‘But Leland was never my lover. We had an agreement. It was a charade we played—’

Angelos spat something guttural in Greek. ‘Don’t talk to me like I’m stupid!’

Maxie looked through him then, and despised herself for even attempting self-defence. It suggested a weakness inside her, a need for this arrogant Greek’s good opinion that her savaged pride could not allow. ‘You stay away from me from now on—’

‘You made your choices in life long before you met me. What is it that you want now?’ Angelos demanded contemptuously.

A semi-hysterical laugh erupted from Maxie and she choked it off, twisting her head away defensively before he could see the burning tears in her eyes. ‘Just the usual things.’ Then she whipped her golden head back, shimmering eyes as unwittingly bright as stars. ‘And some day, when all this is behind me, I’ll have them. I wouldn’t have you as a gift, Angelos. I wouldn’t make love with you unless you tied me to the bed and held me down and forced me...is that clear enough? What you want you will never have!’