Last visited: Page 19 of One Night with His Wife

Page 19 of One Night with His Wife

Refusing to give way to that degrading desire, Star sat in the kitchen by the light of one candle. She didn’t trust herself to get back into bed with him. She didn’t even trust herself asleep in bed with him. Around Luc she did things she would not have dreamt of doing with any other man. Of course this time it was only the lure of his sexual magnetism, his heartbreaking good-looks, his lithe, beautifully built body. In other words, sex—and he was very, very good at sex; that was the only reason she was still tempted…

The limousine arrived at eight the next morning. The chauffeur delivered a garment bag and a small case to the door and then retreated back to the car.

By then Luc was already up, although Star had yet to see him. Minutes earlier she had heard the shower running in the bathroom, and had marvelled at Luc’s staying power under that freezing cold gush. Her own record was three minutes, and she always boiled the kettle for hot water to wash her hair. She put the garment bag and the case into the bedroom and went back into the kitchen to wait.

She had already fed the twins and dressed them in their best outfits: Venus in a pink velour top and leggings, Mars in navy dungarees with a checked shirt. They looked cute. At least, Star thought they did. Hopefully, at some stage, a vague memory of the twins looking cute and cuddly would slightly soften the blow of paternity coming Luc’s way. When the divorce proceedings began she would have to get a solicitor. She would then tell her solicitor to tell Luc’s solicitor that Luc was the father of her twins. 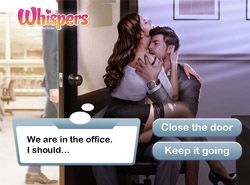 Star could see no reason to confront Luc with the fact that he was a father face to face. Luc was going to be furious. Luc was going to feel trapped and resentful. Luc liked everything to go to plan. Only he hadn’t planned on succumbing to her the night she’d sneaked into his bed, and she hadn’t planned as far as him actually succumbing, so she hadn’t taken any precautions against pregnancy. Why should she put herself through a humiliating scene like that? Nothing she could do or say would make the fact of the twins’ existence any more palatable to him, she reasoned painfully. It would be much easier all round if he received the news from a third party.

Just then, she heard Luc’s steps in the passageway. Her tension level shot so high she felt light-headed. She fixed a really bright and friendly smile to her face. Luc strode through the door as immaculate and elegant as if he had just strolled out of the Sarrazin bank in Paris. Charcoal-grey suit, burgundy silk tie, pale silk shirt. He looked spectacular, and very, very intimidating.

‘You should have wakened me earlier,’ he drawled smoothly.

Encountering brilliant dark eyes as cool as ice, Star hung on gutsily to her smile. ‘Do you want some breakfast?’

‘I’m fine, thank you.’ Luc glanced at his watch. ‘If you’re ready, we should leave now for London.’

The horrible silence stretched. But he wasn’t touched by it. Or by her discomfiture. She could see that. Inside himself, Luc was already so far from her he might as well have been back in France. There wasn’t a hint of warmth or intimacy. There was nothing. It was as if last night had never happened. And Star, who had believed herself prepared for whatever he might choose to throw at her the morning after, just could not cope with that complete denial.

‘Do you think I’m going to cling to you now or something?’ she heard herself demand rawly.

Luc froze, but on the way to freezing he winced.

Hot-cheeked with fury and pain, Star stepped forward. ‘I’m over you!’ she launched at him.

‘We haven’t got time for a scene,’ Luc murmured deflatingly.

Star trembled, and her hands squeezed into defensive fists. ‘Saying how I feel is not creating a scene!’

Luc elevated an aristocratic brow. ‘Doesn’t it occur to you that I might not be interested in how you feel?’

The angry colour drained from her skin, her expressive eyes shaken.

As Star spun away, Luc gritted his even white teeth. That sunny smile she had greeted him with had filled him with volcanic rage. The Star he remembered would have been self-conscious, shy. Not this one. Involuntarily, he recalled the wild sweetness of her response the night he had consummated their marriage. His body reacted with a surge of fierce arousal, infuriating him.