Last visited: Page 35 of To Defy a Sheikh

Page 35 of To Defy a Sheikh

It was nice, because she’d had far too much reality in her life.

Something about this felt much more like a fantasy. Strange, because never in all her life away from the palace had she imagined spending time with Ferran being part of a fantasy. In her life at the palace, perhaps. She’d been fascinated by him then. The handsome prince who was always in trouble. Always up to mischief.

He lifted his head, and the disappearing sunlight cast a glow on his face. She remembered then. An image pulled from deep in her mind. Standing in the palace in Khadra, watching him stride into the room. The way he’d smiled. He’d reached out his hand on her head and ruffled her hair. 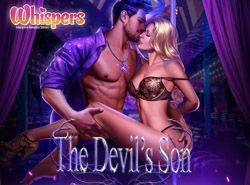 And she’d been certain he was the most beautiful person she’d ever seen.

She didn’t know why she was only remembering this now.

Or maybe she did. Maybe because her anger, her determination for revenge, wouldn’t let her have a memory of him that was so…precious.

It was precious because it was a part of where she’d started, and she had so few memories of that time in her life. The time where things had been right. Before it had all gone to hell.

“I remember you,” she said, allowing real memories to mingle with her words. Allowing herself, for the first time, to really remember the people they had been. Before their parents had destroyed everything.

“You should. I’ve been sitting here with you the whole time.”

“From before,” she said. “I remember you.” It made her feel so strange. To connect him, suddenly, much more strongly with that boy than with the monster she’d made in her mind.

“And what do you remember?”

“I thought…I thought you were beautiful.” They were true words, forgotten thoughts that rose up in her mind and poured from her lips, filled her chest with a strange warmth.

“Did you?” he asked. “That is…not the description one might hope for.”

“I was a little girl. I thought you were fascinating.” She looked down into her bowl. “And you were very nice to me.” Little wonder she hadn’t let herself remember that. Because it did not fit with the stories she’d told herself about Ferran the monster. But here and now, those legends were being overridden with something more powerful. With memory.

“It was impossible not to be. You would not be ignored, and being unkind would have been like kicking a puppy.”

In this moment, she decided she would pretend there was nothing away from this fire. She would allow them to have nothing but these good, shared memories. A truce.

“Well, I appreciate it, anyway. I had a…nice memory just now. I’m short on those. I don’t remember very much about my life before my father died. And I think a lot of that isn’t so much because I was too young—I was six. I feel I should remember some things—but because I forced myself to stop trying to remember. Because it hurt so bad. Because it…made me hate where I was even more. Those memories didn’t serve a purpose, so I didn’t let myself have them.” She looked up. “I’d like to have them again. I’d like to have…something normal.”

Of course he wasn’t. How could he be? Given the way things were all tangled up, he couldn’t be. And still, she pressed. “Why?”

“I’m not sure I know what normal is. Though, I’m not sure either version of our lives, on this side of the tragedy or the other, were normal.”

“And you’re looking for your smile.”

“I am. Currently seeking any emotion other than anger or fear, actually. That’s basically been my life for the past sixteen years.”

His expression changed, hardened. “I cannot imagine all that you’ve been through.”

“It’s okay. I mean, it’s not okay. But it’s what is. And there is nothing that can be done about it now.”

“I wish there was more I could do.”

She laughed suddenly. So suddenly not even she expected it. “It’s so strange. I never thought I would sit across from a campfire with you while you offered to try and fix things for me. Not so long ago, I would have cried death before dishonor but…I feel like I was wrong about you.”

“I don’t see how either of us could have won in the situations we were put in, Ferran. You were a new ruler and you had to act as a king. And that day my father did not act as a king. He was simply a jealous man. Ruled by emotion.” She took a breath and tried to loosen the tightness in her chest. “He was tried fairly, and found guilty of a crime he absolutely committed. What happened to my mother and I was less just, but it wasn’t by your hand.”